I hypothesize that people who play fast paced action video games will have faster reaction times than participants who play slower  video games.

I also predict that people that play fast or slow video games will have faster reaction times than non video game players.

Videogames and the brain:

More than one billion people play video games every day and there are differing views about what video games do to the brain. Some people say they are good for the brain, others say they are not. Even though some have said video games cause violent behaviour, there has not been a complete answer as no one has found enough proof (Nichols, 2017).

What is known is that video games change the structure of the brain. Those changes have been found to be both positive and negative. Studies thus far have found that videogames have positive effects on attention and motor skills but they can also have negative effects due to the higher risk of developing an addiction (Paulaus, 2017).

More specifically studies have found video games improve capacity in the frontal lobe, which is important for attention (Marengo, 2014), and areas in the brain responsible for visual and spatial information and memory (Nichols, 2017). They also found that those that those that play fast video games have better selective attention, required for fast movements over slow game players (Paulaus, 2017).

How to test how fast someone reacts

He did the following tests:

Physical process of a reaction

What happens in the body during a reaction time test?

All of this happens in a quarter to half of a second! (Salk Institute, 2005)

What the research has made me curious about.

1. Participants were asked to state what type of videogame they played the most. The three categories are:

A. Fast paced games (examples below)

C. Do not play video games

2. Each participant was asked to do the online reaction time test at https://www.mathsisfun.com/games/reaction-time.html, one at a time and the results were recorded with their video game choice. Each person did five test trials and the average of all trials was recorded.

4. Group scores were tabulated in Ms Excel and averages were taken for each group and compared based on average. Bar chart and box and whisker charts used to show difference in average and rage of results.

Those that played fast and slow video games had faster reaction times than those who didn’t play video games at all (average: 0.40 seconds). 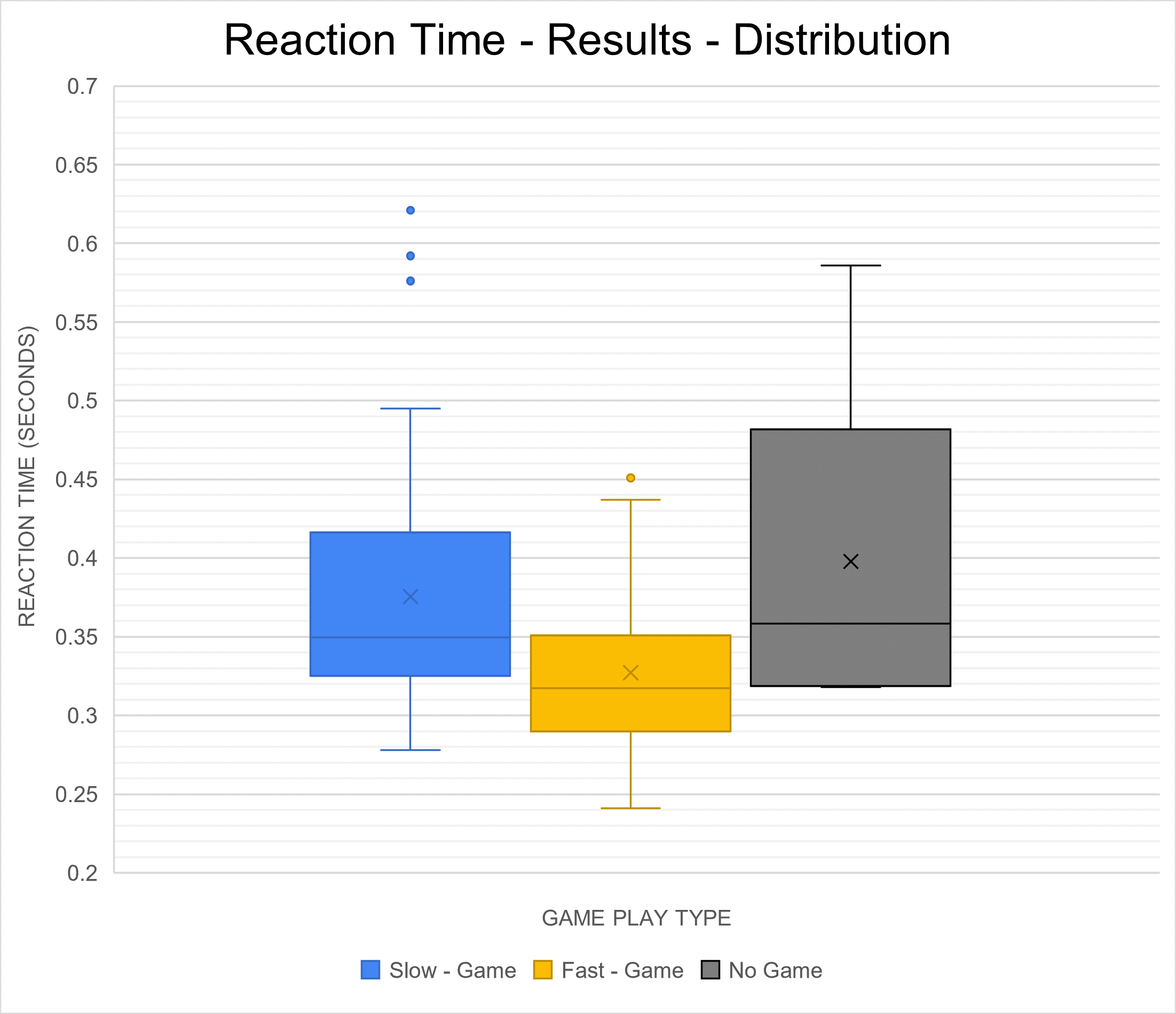 Based on the results of my test, my hypothesis was correct.

Further experimentation is needed to show direct cause and effect related to whether playing faster videogames improves overall reaction times.

If faster game play is related to faster reaction times, it is possible that playing faster paced videogames could help a person improve coordination and faster response times.

MORE IMPORTANTLY THOUGH: It shows that video games may be beneficial so parents can RELAX already!

Environmental - tests were done in three different classrooms. All classrooms were generally quiet, but they were all slighly different. The difference in environment could have resulted in different reaction times.

Participant understanding - Some participants thought the test ended earlier and took longer to respond to the last reaction time test. This may have impacted their average score. When this happened and I noticed, I had the participant redo the reaction time.

Game pace grouping - Types of games were grouped together based on game play pace. What some consider fast and slow may differ from one person to another.

Marengo, L. (2014). What happens to our brain when we play video games? http://latinamericanscience.org/2014/08/what-happens-in-our-brain-when-we-play-video-games/

Thank you to my teacher Mr. Earle who helped me conduct my experiment. He helped me over three lunch hours collect over 70 results! I couldn't have done it without his help.