In my project I will test if changing amounts of motor oil and nutrients in a controlled fresh water oil spill with added microbes will affect the amount and speed the oil will be bioremediated.

How does varying the amount of nutrients and motor oil in a controlled fresh water oil spill with added microbes affect bioremediation of the oil?

This is only a summary of research completed before and during this experiment. More research details are in the logbook and science fair binder.

"Petroleum, also called crude oil, is a fossil fuel. Like coal and natural gas, petroleum was formed from the remains of ancient marine organisms, such as plants, algae, and bacteria. Over millions of years of intense heat and pressure, these organic remains (fossils) transformed into carbon-rich substances we rely on as raw materials for fuel and a wide variety of products." (National Geographic)

It is important that when oil spills happen that they are cleaned up in the most effective way that is done with consideration to the environment. According to the EPA “Oil spills occurring in freshwater bodies are less publicized than spills into the ocean even though freshwater oil spills are more frequent and often more destructive to the environment.” It is important to properly clean the site of oil as we source our drinking water from many freshwater bodies of water, the water bodies and their surroundings are used as nesting grounds and food sources for many biotic freshwater organisms. All freshwater organisms and vegetation are vulnerable to the deadly and toxic effects oil spills can have on them and their environment. According to the EPA “Standing water such as marshes or swamps with little water movement are likely to incur more severe impacts than flowing water because spilled oil tends to "pool" in the water and can remain there for long periods of time.” It is even more important to properly clean the areas because it could save lives for all of the creatures living in the area.

“Spilled oil can harm living things because its chemical constituents are poisonous. This can affect organisms both from internal exposure to oil through ingestion or inhalation and from external exposure through skin and eye irritation. Oil can also smother some small species of fish or invertebrates and coat feathers and fur, reducing birds' and mammals' ability to maintain their body temperatures.” (Office of Response and Restoration)

The Process of Oil Breakdown

Biodegradation is a natural process that occurs in the environment.

“Bioremediation is an engineered technique applied by humans to clean the environment.” (The Biology Notes)

Aerobic biodegradation is done by aerobic microorganisms when an adequate supply of oxygen is available for their activity.

Anaerobic biodegradation takes place in the absence of oxygen. Its pathway has four major steps:

Organic substances are subjected to anaerobic digestion and converted into carbon dioxide and methane.

OEMs eat hydrocarbons (compounds that make up crude oil) Microbes separate hydrocarbons into fatty acids which are split into carbon atoms that have been reused by the microbes in metabolism. Oil is broken down into metabolites, carbon dioxide, trace carbon, lipids and water.

The 6 conditions that affect microbe growth. 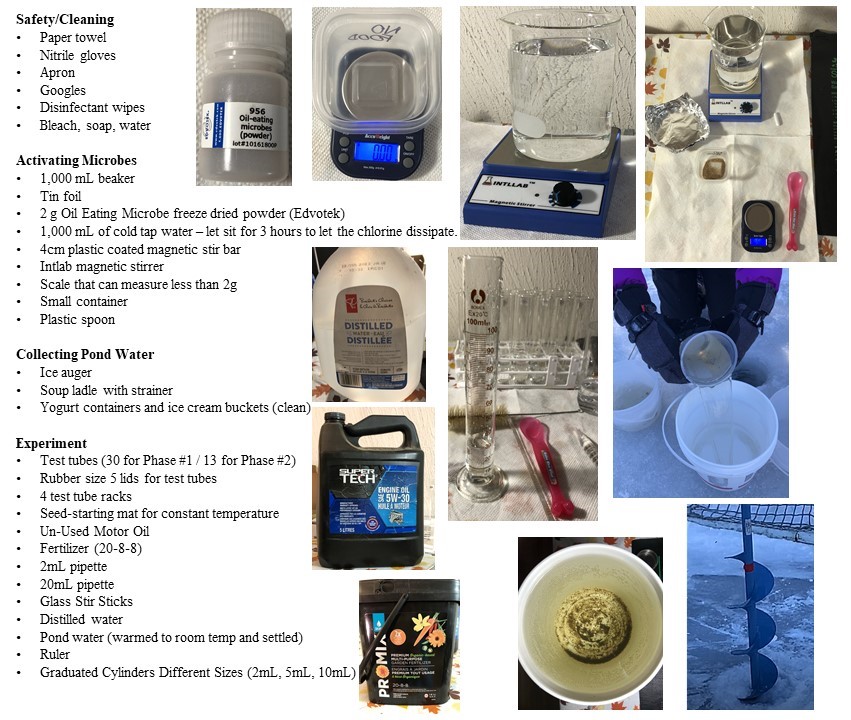 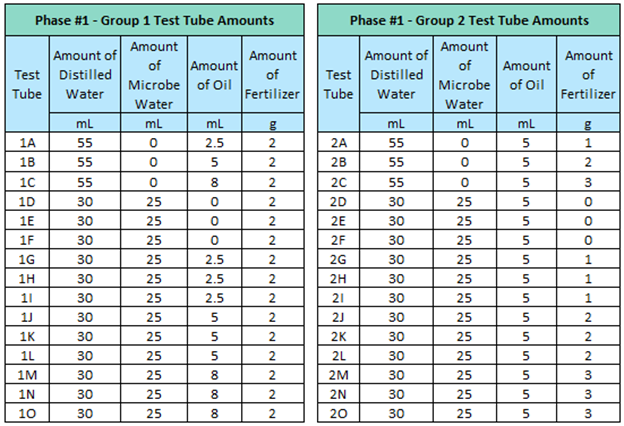 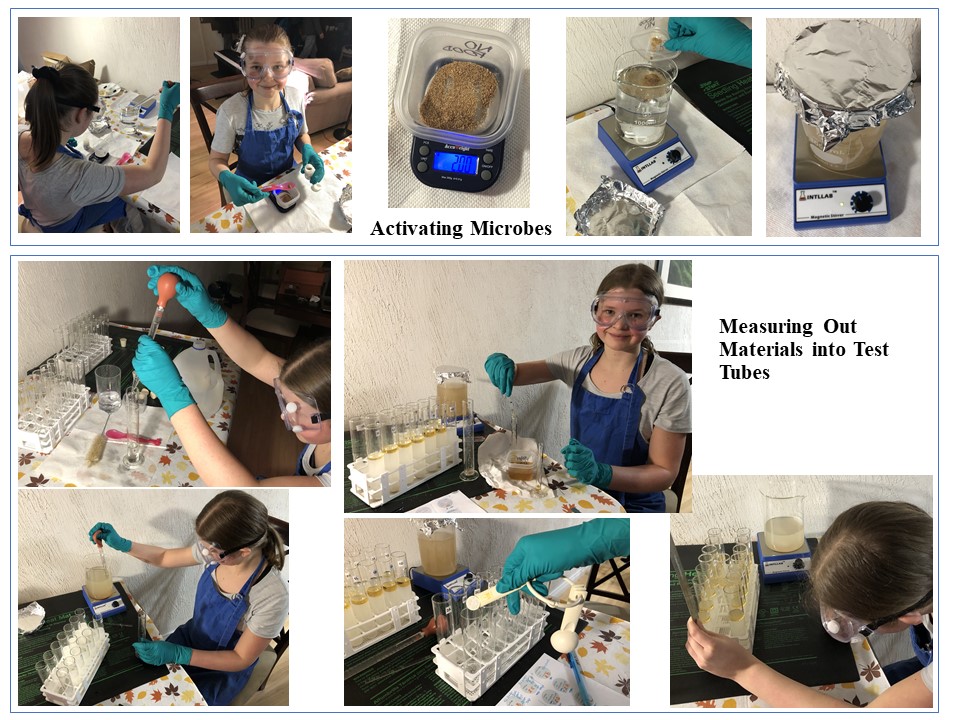 ** Here is what the test tubes should have in them up to this point: 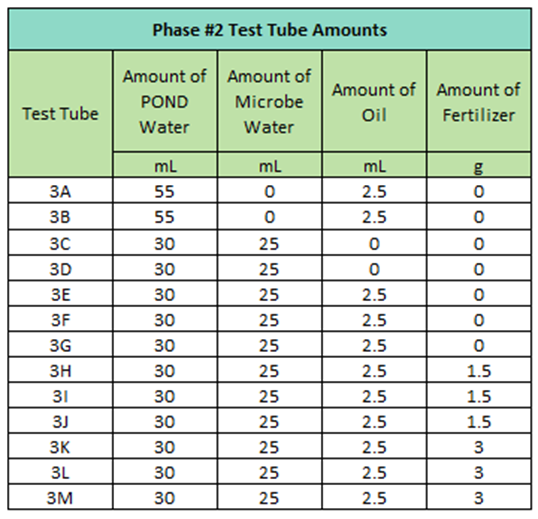 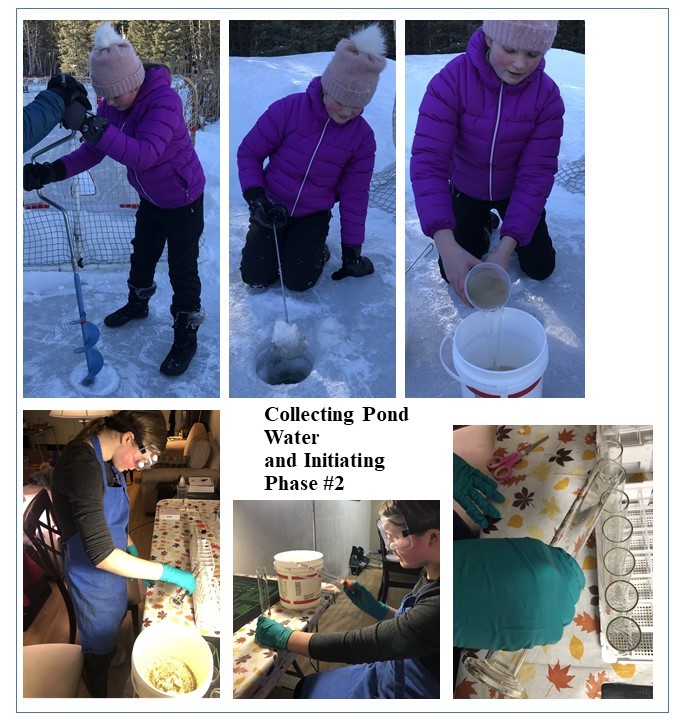 The following measurements were collected during the different phases of the experiment. 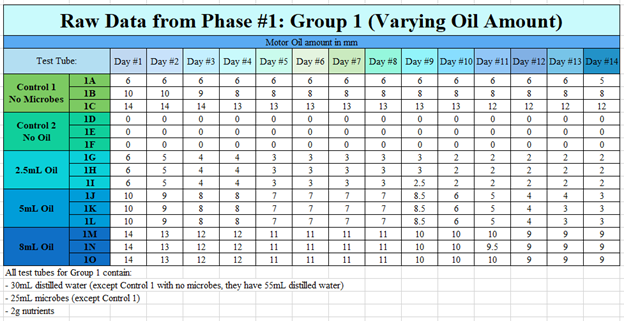 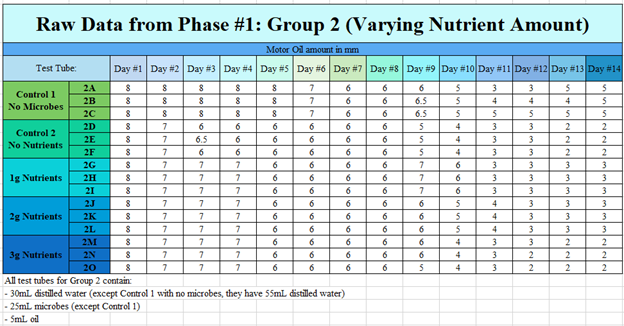 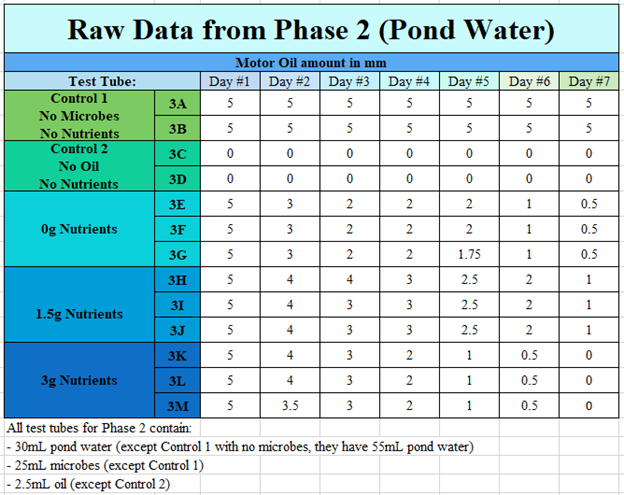 * More detailed written observations are included in the logbook. 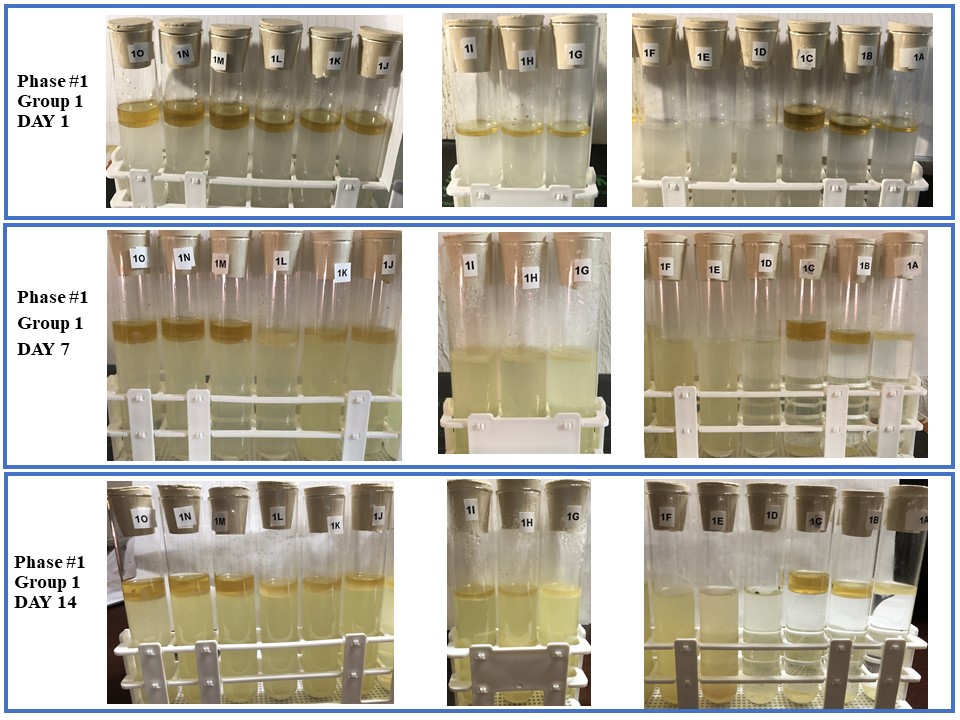 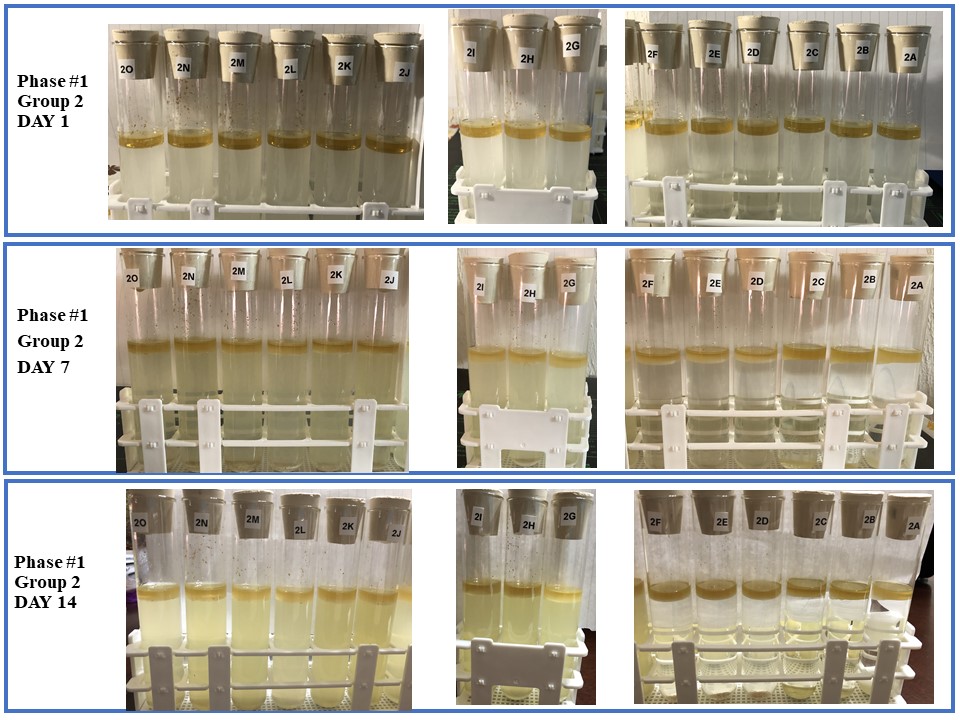 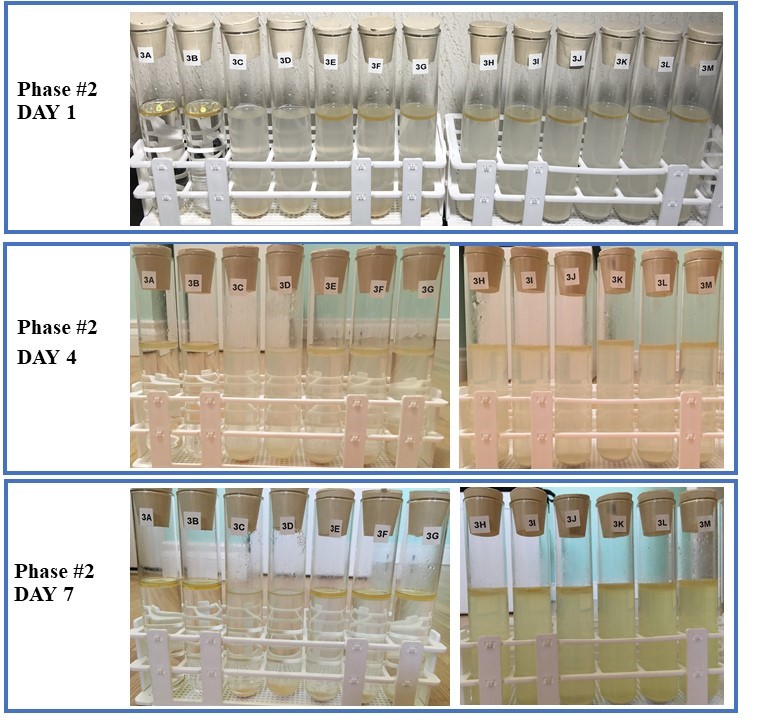 * Additional data analysis details are included in the logbook.

Table 2 shows the average reduction in oil column height over the 14-day period. Graph 3 (Group 1) and Graph 4 (Group 2) show this data visually. This was done to visually see the oil reduction over time since some of the test started at different oil heights at the start.

In Table 4 the oil column height measurement data was averaged for the three test tubes in each group. The data from Table 4 was used to create Graph 7 which show how the amount of non-bioremediated oil column height changed over the 7 day time period.

Please refer to data analysis tab for details on data and how it was analyzed.

Review of My Hypothesis Compared to Results

Next Steps and Application to the Real World

Next Steps and General Application

The reason I became interested in bioremediation of hydrocarbons in freshwater is because my Grandparent’s had a bobcat spill diesel in their pond in Bragg Creek over Christmas this year. We helped research ways to clean up the spill and this led to my project idea. I could not test diesel specifically as it is too smelly to have in our house which is why I picked motor oil. Once the ice melts on the pond in the spring I would like to go out and study the spill area to see if there is any indication of remaining diesel. If there is still diesel present I am hoping I can take what I learned and help clean up the pond.

The major sources of error for this project include:

Some ways to reduce these sources of error if I completed this project again:

Other sources of error for this project may include: